Messier 51 (NGC 5194/5), the Whirlpool Galaxy in Canes Venatici, in a three-color reconstruction from BVR CCD images taken with the 1.1-meter Hall telescope at Lowell Observatory. The companion lies well behind the prominent connecting arm, whose dust can be seen obscuring the smaller companion's light. Much of the spiral structure in NGC 5194 can be traced to the tidal perturbations produced by the companion NGC 5195.

This is not quite the best image I'd like to put up - the three individual frames were taken from focus tests during the first night I ever used the Hall telescope, and this was my first experiment with pasting together a color composite on what was then my brand-new first SGI machine. There are some spectacular pictures available, notably the Hubble Heritage picture of the inner spiral of NGC 5194 and SN 1994I observed near the nucleus (visible even with the 10" Dobsonian on my back deck, in fact).

For contrast, here is a 10-minute exposure done remotely using the 0.9-meter telescope of the SARA Consortium on Kitt Peak, Arizona: 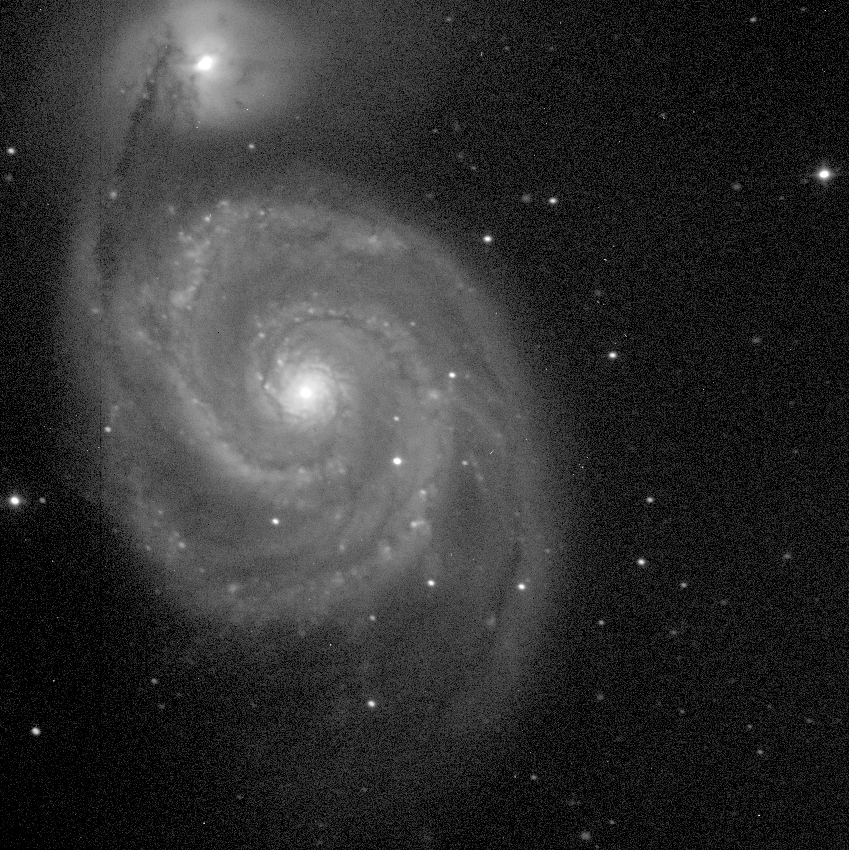 And as the SARA observatory grew, a BVR image in the excellent seeing often found on La Palma using the 1-meter Jacobus Kapteyn Telescope (JKT):

The interaction between M51 and NGC 5195 has given rise to faint tails and fans of stars. These are shown in a 30-minute image stack with the University of Alabama Crimson Dragon wide-field system, done while deployed to Kitt Peak.